NOTE : This uses an experimental feature of Ghost, which may change, break or inexplicably disappear at any time. So use this at your own risk !

At the dawn of this new year, I wanted to start with a project I had in mind since I migrated this Ghost Blog to Kubernetes : Backups. Until now, backups were performed manually, whenever I thought about it, and made up of a manual export of the blog content to a single JSON file, using the Ghost CMS administration panel.

Then I used to manually upload the resulting JSON file to an external system, such as S3 or Google Drive.

As an automation lover, this manual approach was unfortunately not entirely satisfactory to me. So I set out to find a simple way to automate such backups, ideally using Kubernetes built-in primitives. And by "simple", I mean leveraging official Docker images with little to no custom code. 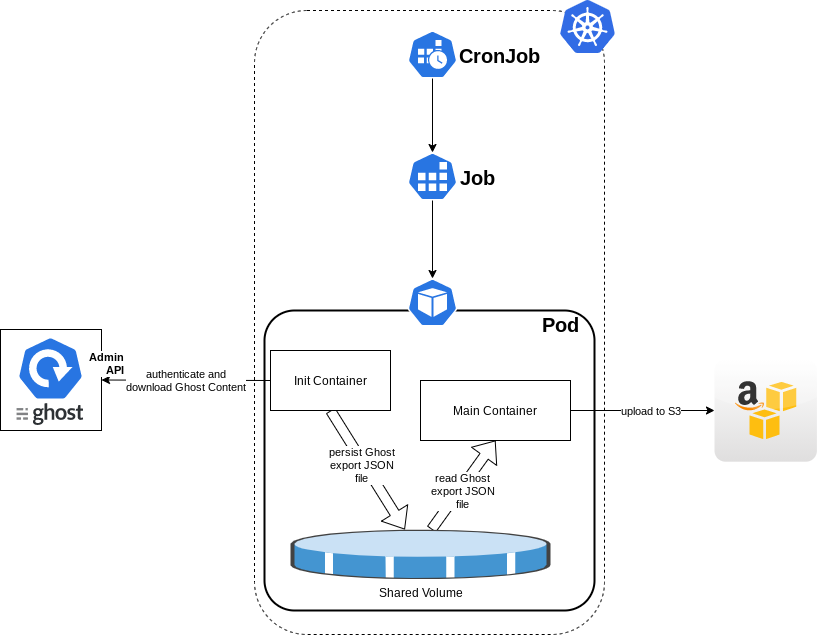 The idea is quite simple:

To keep the workloads portable, it is recommended to separate the Configurations from our Pods and components. As such, I defined:

The Pods spawned by the CronJob would then read such configuration data as needed.

Or you can also create it manually using the following imperative command:

Or you can also create it manually using the following imperative command:

The Pod created by the CronJob is made up of the following:

Notice the use of parenthesis (instead of brackets) in "$(S3_DESTINATION)" (Main Container Args) to allow for Shell variables expansion by Kubernetes.

At the moment, there are few limitations worth bearing in mind.

Thanks for reading. As always, any feedback is more than welcome.